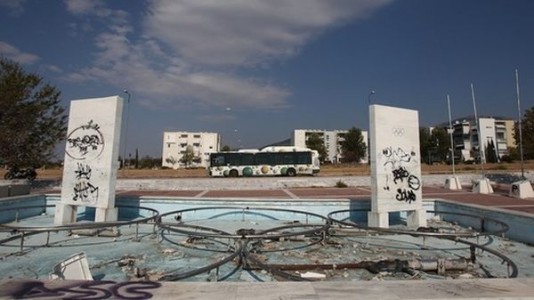 A bus passes the remains of a fountain made with Olympic rings and graffiti-defaced marble blocks that were originally dedicated to Greek Olympic medal winners, at the former Olympic village on the northern fringes of Athens, Thursday, Aug. 2, 2012. After the Athens 2004 Games, the village was used as a worker housing project. Eight years after the Athens Games, many of the venues remain abandoned or rarely used, focusing public anger on past governments as the country struggles through a fifth year of recession and a debt crisis that has seen a surge in poverty and unemployment. (AP Photo/Thanassis Stavrakis)