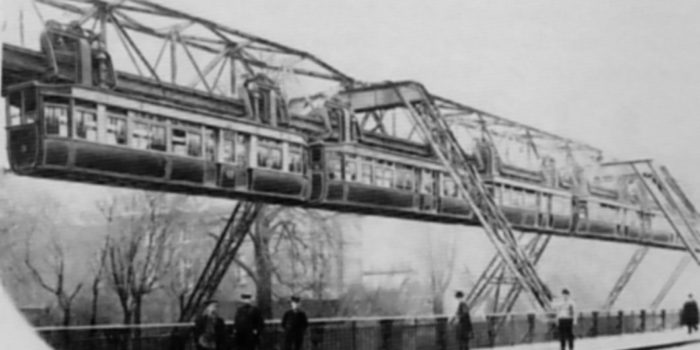 The Wuppertaler Schwebebahn is this amazing hanging monorail that crosses the city of Wuppertal, in Germany. Created by Eugen Langen and inaugurated in 1901, it was originally intended to serve Berlin.

At the dawn of the 20th century, several renowned urban planners in Wuppertal were faced with a major challenge: to create an efficient means of transport that would serve a growing industrialized city, built on uneven terrain and prone to flooding. It will be the Wuppertaler Schwebebahn , the first suspended monorail in history.

For this, Carl Eugen Langen will reuse the plans of Henry Palmer, the English engineer who had imagined this means of transport in 1824. During the 1880s, Langen developed the first prototype of a monorail suspended in Cologne, and tested it successfully. Construction could then start in Wuppertal .

Supervised by Wilhelm Feldmann, its construction began in 1898 and ended in 1901. Called “Wuppertaler Schwebebahn “, this new atypical means of transport aroused incredible enthusiasm in Germany. The Emperor William II even embarked on the monorail during a test carried out on October 24, 1900.

At present, the monorail of Wuppertal includes an overhead line comprising 20 stations over a distance of 13 km. It is suspended 12 meters above the Wupper River , and almost 8 meters above the city streets, reaches a maximum speed of 60 km / h and completes the course in about thirty minutes. It transports 75,000 passengers daily, or 25 million per year.

Despite its aerial characteristics, the Schwebebahn has experienced relatively few accidents. The first fatal accident occurred in 1999, when car number 4 derailed and fell into the Wupper River because of parts left on the tracks during repairs. This terrible incident claimed the lives of 5 passengers and left 47 injured.

In 116 years of existence, the services of the monorail whose traction is ensured by an electric current of 600 volts have only been suspended on rare occasions. During the First World War, women ensured its functioning.

During the Second World War, air raids on Wuppertal seriously damaged its stations and parts of its tracks, and it was not until the end of the war in 1945 that repairs were made. The Wuppertaler Schwebebahn returned to service in 1946.

In 1950, a strange accident made it a legend. Thinking of achieving the publicity stunt of the century, a local circus decides to make Tuffi, one of its elephants, climb aboard the kaiserwagen. Panicked by the sounds of the hanging monorail, the animal crosses the side wall of the compartment and lands in the river below, unharmed.

The journalists who accompany him will not be so lucky, however, and several will be injured in general panic. This unusual incident will become so famous in the region that many drivers will claim to have been in control of the train during the accident.

Since 1901, the concept of the monorail has attracted many cities around the world because of its many advantages: small footprint, lower construction costs compared to traditional rail systems, reduced noise pollution, and no interference with other modes of urban transport.

The first suspended monorail in history inaugurated over a hundred years ago, the Wuppertaler Schwebebahn remains very popular with locals and tourists and has made the city of Wuppertal famous worldwide.