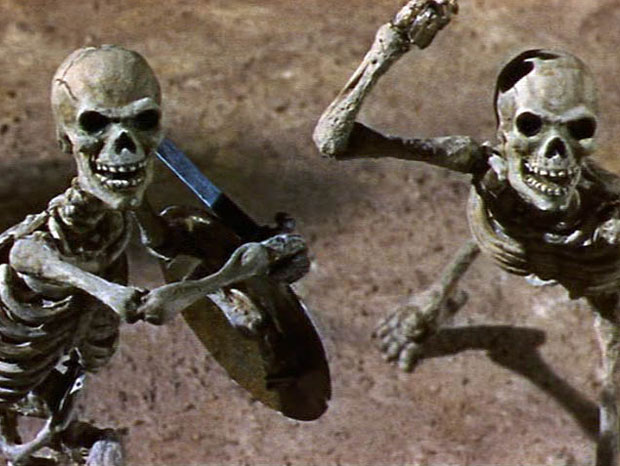 With the evolution of modern technology, it is difficult to find films that do not contain special effects.  Looking back few decades earlier, it is interesting to know how these special effects were produced in the film, without modern computer and graphic technology. Here we present 12 such famous films and briefly discuss how these special were realized. See, think and enjoy!

The scene of the fight against the skeletons is famous for its duration: about 4 minutes. However, this scene is the work of a genius of special effects Ray Harryhause . The realization of this sequence involved shooting stop-motion scenes for four months.

An American Werewolf in London (1981)

Masterpiece of science fiction, the film  of  Stanley Kubrick  has a really impressive exploration spacecraft. To get the rotation effect, a company specializing in aircraft design was commissioned to make  a “wheel” of 30 tons (and costing more than $ 750 000). The centrifugal force was used wisely to mimic the effect of weightlessness: furniture and chairs were all firmly bolted to the floor.

Close Encounters of the Third Kind (1977)

For the impressive spaceship landing,  Steven Spielberg  used a fibre glass model 121 cm high and 152 cm wide. The replica of the saucer was lit by fibre optic cables, bulbs and neon tubes, and then lowered to the ground with cables.

The famous tornado film was created using pantihose! They were filled with sand and a blower machine made them spin in a scaled down Kansas ranch. However, in the scenes where the tornado is seen from far, the director used images of real tornadoes.

A classic science fiction that has just been awarded for the Best Visual Effects from the Academy Award. The submarine in the film, in which the characters navigate oceans, was a replica of a real military submarine. In some scenes, the actors were attached to cables and moved in the air.

To achieve this a bit repugnant effect of of Nazi faces melting, the visual effects teams have created masks made of gelatin layers. These masks were then actually melted. The layers were designed precisely so that it gives the effect melting of face.

The explosion of the Death of a Star in the film was filmed using a camera with controlled movements. It was raised from the ground and directed to a metal box filled with explosives and flammable agents such as sulfur, potassium or coal. Filmed this way, the explosion gives the impression that the pieces are scattered through space.

For this scene,  King Kong  was a puppet of about 45 cm, which was filmed in stop-motion. The actress playing the victim of the giant gorilla turned her scenes separately and the two images were then merged to give the final result.

To achieve this incredible scene,  Cecil B. DeMille  filmed two large “garbage trucks” that were filled with water. Then he simply reversed the images to create the effect of water separation. To stage two water walls, the team filmed a tank from which water was flowing continuously and then reversed the image to create this vertical wall.

The most mythical scene of the film was  “chestburster ” where the baby  xenomorph  bursts out of the chest of one of the character. This scene was realized  fairly simply. A plate made ​​of glass fibre, containing tubes to squirt fake blood and an animated puppy was placed on the actor. Then cables were used to make the alien appear escape the room quickly.

The director,  Robert Zemeckis, used a little trick for this scene. When the  Delorean is still in the air before landing, it is actually a model. And to hide the transition to the real racing car rolling on the asphalt, the director used the lamp. This Subtility is not easy to notice if you’re not aware of it in advance.