Swarm of Minibuilder robots can now be used together to make buildings much bigger than robot themselves. Engineers from Institute of Advanced Architecture in Catalonia (IACC) are behind this new innovation. There are different Minibuilders, each with its specialized task. In order to make the buildings, the robots eject a concrete like material that is hardened quickly.

One hurdle in constructing big and tall skyscrapers using 3D printers is that the 3D printer needs to be bigger than the building itself. This problem has been solved using the concept of small-sized swarm of robots. Minibuilders robots have been developed by the engineers of Institute of Advanced Architecture in Barcelona. These robots can work together to make tall buildings which are even taller than the robot themselves. In order to make the buildings, the robots eject concrete like material that is hardened quickly.

First computers are used to design the architecture of the building and then robots execute the design. To start with construction, a large coiled pot like structure is built up by the foundation robots which eject a quick-drying mixture. The first 20 layers of the structure are made by the foundation robots while the remaining is built up by the grip robots. Afterwards the vacuum robots are used to install reinforcing lines. If number of robots are used together simultaneously, a tall building can be built easily and speedily. Every robot has its specific task and the family of Minirobots work together to perform complex tasks. 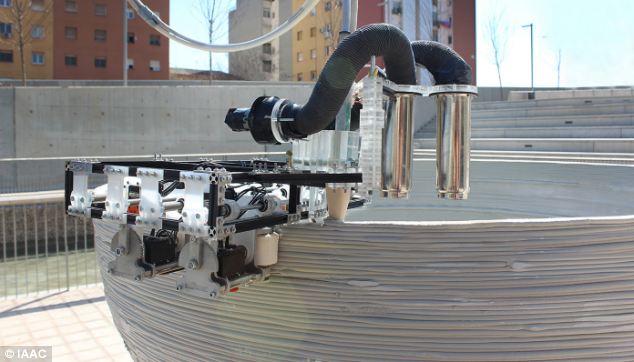 So, we can say it is similar to the strategy of divide and conquer in which a large task is divided into smaller and simpler subtasks. Huge 3D printers are expensive and inappropriate for building larger buildings. On the other hands, the mini builders have a lot to offer with less complexity. You can make the buildings of virtually any size and can take the machines to the construction site easily. With the help of minibuilders, the waste products are also reduced because they pump what is required. The minibuilders may also be used as decorators and plasterers.