The American company Boston Dynamics has been building the PETMAN (Protection Ensemble Test Mannequin) for the Defense Advanced Research Projects Agency (DARPA) for last many years. Previously, we have been seeing the videos of  headless PETMAN Robot trying to imitate humans in the jobs like doing push-ups, walking, squatting,  climbing stairs, stretching and self balancing when given a stout stove. Most interestingly, this human like robot had also the ability to sweat so that it can regulate its temperature like humans.

The Boston Dynamics has released a new and incredibly impressive video in which PETMAN is seen for the first time seen walking with human clothes.  The wild wires on the robots body have been neatly concealed. The robot is walking without support of cables. The cables are only used to provide electirc power.

This test was designed to use PETMAN as test-body to test chemical protection suits and gas masks. Sensors embedded in PETMAN’s “skin” are able to detect if any chemicals are leaking into PETMAN suit. Hence, we can test if the suit can be used by humans for working in toxic environments. 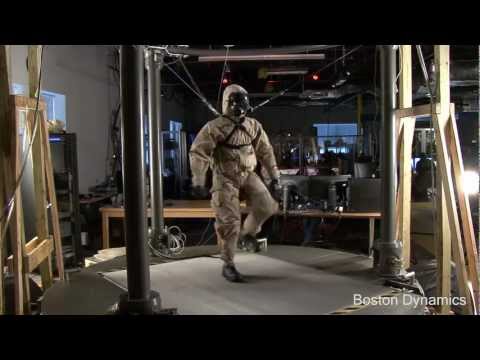