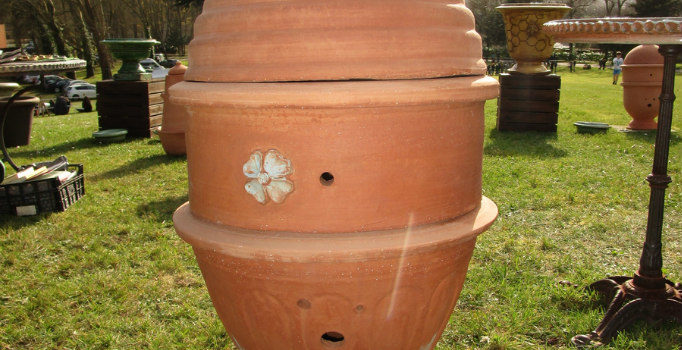 You will soon see the bees in the cities. This is in any case the objective of Habeetation. This French start-up created by 3 students, wishes to relocate bees in urban areas using a revolutionary hive system.  We enlightens you on the subject.

The end of humanity may not be that close in the end. Thanks to this new hive system, Pascaline Logeais, one of the founders of Habeetation, hopes to contribute to the survival of bees, which are significantly disappearing from year to year due to the action of humans. By rethinking the aesthetics of classic hives, these young entrepreneurs aim to relocate the honey bees in urban areas and help them spread. The square shape of hives is thus exchanged for a round shape, similar to an egg, made of mud and without treatment. They will be able to check the behavior and health of the bees that will inhabit them.

Besides the aesthetic aspect, the main innovation of this hive is the fact that it will never be emptied of its honey. “Currently, up to 50% of bee colonies disappear every winter. In our hives, they will have enough to eat during their hibernation periods, without the stress caused by human intervention and treatment,” explains Pascaline Logeais .

The survival of bees is indeed a major problem for the survival of our environment. These are polynizing insects, that is to say that they ensure the reproduction of certain plants by transporting pollen between male and female plants. Thanks to their action on pollen, bees act on more than 70% of our ecosystem and indeed influence the fruits and vegetables that we eat every day. Moving bees in urban areas would thus reduce human action by limiting the effect of pesticides which are even more harmful than pollution.

“We intend to naturally recreate their habitat in our hives by diffusing odors of honey or propolis”, explains Pascaline Logeais . All this, while taking care not to overcrowd a given perimeter, so as not to unbalance existing ecosystems. Thanks to the help of several beekeepers, these former students were able to recover swarms of bees in order to facilitate the launch of their product, scheduled for spring 2017. Regarding the target, the hives will be offered to local authorities, companies or associations in the form of seasonal rental for a sum of between 1,500 and 2,000 euros.

This new hive system will therefore make it possible to facilitate the survival of bees and to raise awareness of the population on their major role. Through this project, Habeetation also intends to “educate citizens to review their environmental impact positively.