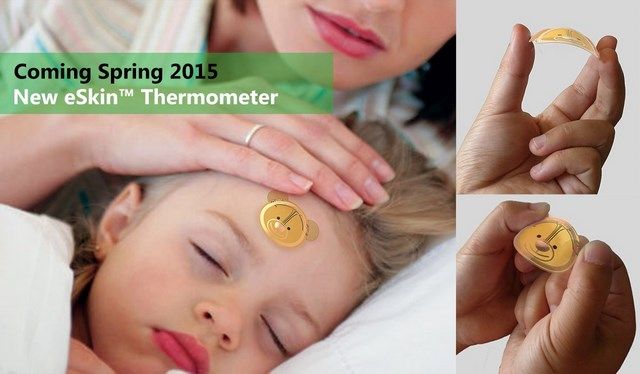 The North American company VivaLnk has developed a thermometer for children which is in the form of a sticker and integrates a NFC chip. Placed on the forehead or forearm, it transmits the temperature information to a smartphone. The launch is planned for this spring.

Is this the beginning of the end for the medical thermometer as we know it? VivaLnk has introduced a new method to measure the body temperature of a patient. Instead of placing the instrument in somewhat invasive manner in armpit, mouth, rectum or ear- it sticks to the skin. Operation is simple, once the NFC is placed as sticker on the patient, for example on the forehead or forearm, it reports its findings to the terminal to which it is connected.

The mobile app also offers us an opportunity to not only store the history of measurements over time, but also issue an alert if the temperature rises above a threshold. This sticker, which looks like a teddy bear, can be adopted by children like a Teddy Bear. It includes an NFC chip for wireless communication with a smartphone or tablet, and a temperature sensor that detects the temperature within three seconds .

Interviewed by Engadget, the officials at VivaLnk indicated that the stickers can be washed and has a lifespan of 15 days. The company is already well known in the field of NFC. Last year it introduced a tattoo based sticker to authenticate with a smartphone or tablet. Instead of entering a password, a PIN code or even use fingerprint, the user has to simply use the tattoo sticker to unlock it.

With this technology, the VivaLnk company has become a part of the movement to revolutionize health sector by introducing personalized medicine. With Big data and automated tools to analyse the medical data,  the efficiency of the health care will be greatly improved.

The idea of personalized medicine is to intervene at the earliest possible stage of the detection of a disease. But if these technologies have great potential they also raise many fundamental questions about what happens to the personal data.