Perhaps, this new thimble can prove itself better than the traditional mouse. The intelligent device uses 3D accelerometer, gyroscope, magnetometer and optical flow sensors for orientation and mouse control. We tell you more about this interesting invention.

The era of computer mouse is now at stake due to this this new thimble gadget, equipped with a gyroscope and accelerometer. The new thimble can prove itself better than that of traditional 70 years old mouse. Now, with the help of thimble users can move the objects, tap and click the icons using their fingers only. The device has been developed by the Anh Nguyen and Amy Banic from the University of Wyoming. The intelligent device uses 3D accelerometer, gyroscope and magnetometer to achieve mouse orientation.

There are also some optical flow sensors which monitor the movement on a 2D surface. To click on the icons, a button between forefinger and thumb is used. It acts like a standard mouse”s left-click. The data from all the sensors is transmitted to the laptop to make the cursor movements. The device can also operate in touch screen mode. 3D touch accurately detects the position of the cursor on the laptop screen with the help of the sensors. According to the researchers, the device is intelligent enough to have a precision up to 1mm. The device also provides multi-touch gestures. 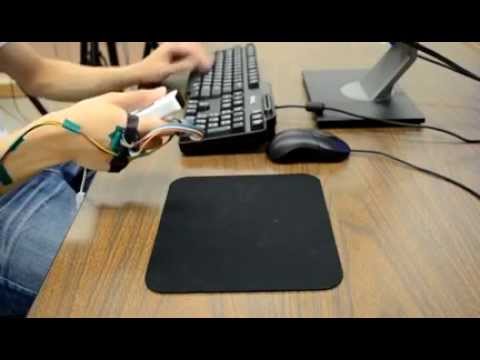 At the moment, the technology is wired with the system Arduino controller but the researchers are working on making the device wireless. With the help of 3D touch, you can use your fingers or thumb as input device. The aim of designing the device is to fill the gap of a 3D input devices which is mobile, self-contained and compatible with other devices. It is a low cost solution for implementation and designing a device of this cadre. This will lead to an open debate for researchers in the area of interactive gadgets. No doubt, it is an amazing invention by the researchers which will open new horizons for the interactive technologies.