There are many small villages, around the world, in far flung areas which suffer from scorching heat and do not have electricity. Now, people living in such villages can have a sigh of relief as they can have their fridge which works without electricity. All this was made possible thanks to the efforts of Coca-Cola that invented World’s first Bio Cooler that does not require electricity.

The fridge works on the principle of evaporation and liquefaction of the water. There a plants on the upper part of the refrigerator. Just watering these plants causes water evaporation, resulting in cooling of the refrigerator. Then the sun’s rays are captured by a mirror, which are used to convert the cooling liquid in the fridge to gas, thus further lowering down the temperature. This enables the fridge to keep the liquids inside cool.

Seeing for the first time, this innovative fridge may look like a small vending machine in which you can stack up cans of different types of drinks. The process of conceptual design, development and testing of this fridge took about a year to complete. It has been developed by Leo Burnett Colombia with the collaboration of International Physics Centre in Bogota. The project has been showcased in Colombian town of Aipir, in La Guajira. This town to the north is one of the hottest in the country. The residents were very happy to see the Bio Cooler installed in their town as earlier they had to travel a day to get the ice. 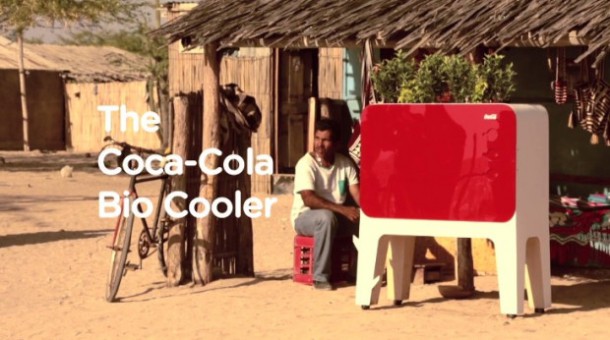