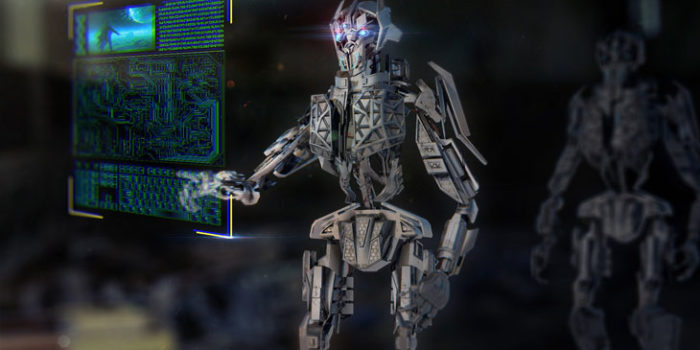 In many science fiction works, authors or scriptwriters invent futuristic weapons. They imagine an entire arsenal developed using technologies that can equip a soldier in a video game, a book or a film. And very often, it is these technologies that make the difference during a war. The great powers have understood this well: here are 10 science fiction weapons that have been created.

EMI, OR THE ELECTROMAGNETIC PULSE

This technology makes it possible to emit electromagnetic waves in a given area. The effects are multiple and depend on the intensity of the waves emitted: they can disturb signals such as those of radios, or even prevent any electronic equipment from working. It is also possible to use EMI to disrupt the neural connections of individuals and cause loss of consciousness.

This technology can be used militarily. The US Air Force is already working on it, with the CHAMP project (Counter-electronics High-Powered Microwave Advanced Missile Project). The American army indeed carried out a test in the state of Utah, and were able to deactivate the electronic devices arranged in 7 buildings (empty, of course).

The hypersonic missiles developed by Russia made headlines in March because their speed exceeded the estimates predicted by scientists.

In general, the speed of these missiles is precisely what makes their strength and efficiency. Capable of defeating anti-missile detection systems, they represent a particularly serious and destructive strike force in the event of direct conflict. Russia is not the only country working on it: China has also successfully tested its own. They are not, however, fully developed: there is still talk of perfecting directional control and missile precision. But wait the science fiction has becomes a reality …

In numerous sci-fi works, we imagined soldiers capable of controlling robots so that they could spy on or even directly attack their enemies, all from a distance. Drones are now almost “ordinary” weapons, since outside the military, individuals buy them to film inaccessible places.

Micro-drones are yet another story: their discretion is an undeniable asset in the context of a war. In January 2017, the Pentagon announced that it had successfully tested 103 micro-drones about 16 centimeters each. Autonomous, they can make their own decisions, change their trajectory according to the information they collect in real time. It is likely to integrate nuclear micro-weapons into it in order to make them even more dangerous…

Artificial intelligence is a recurring theme in science fiction, and its development in real life has been accelerated since the 1990s. But the programming of combatant AI has always been controversial: how to be sure that AI can differentiate soldiers and civilians? How to manage the failures and overruns of these weapons?

In any case, AI is already part of military strategies. We can especially think of “Harop”, AI in the form of an unmanned aerial vehicle that can destroy air defenses by a self-destruct system (once close enough to its enemies, the vehicle explodes). Germany would also have an AI capable of firing missiles without any human intervention.

It is possible that similar AIs are being developed in other armies. Enough to give life to the robot war, so common in science fiction.

Telekinesis is one of the most widespread powers in science fiction, especially among superheroes. If this ability seems particularly impressive, when it comes to controlling weapons, armed robots or dangerous vehicles from a distance, it immediately becomes worrying. If you think it will not happen before 2100, think again: this technology already exists.

The US Defense Department has confirmed that it has several programs focused on the creation of thought-controlled weapons. Outside the military, we know that a study at the American Duke University has proven the existence of this technology: the “brainet”, originally developed to allow people with neurological disorders to move objects , and is functional.

A COMBAT OUTFIT INCORPORATING AN EXOSKELETON

This may seem particularly futuristic and is reminiscent of the outfits worn by the Stormtroopers, soldiers of Darth Vader in Star Wars. However, this outfit created by the Russians is almost functional.

It behaves like a full-face helmet and advanced armor. Tactical data and various information can be displayed, for example on the helmet. But the most surprising is that a motorized exoskeleton is integrated into this outfit, which allows to increase the strength of the soldier who wears it, but also his endurance.

This equipment is thus designed to reinforce the power of humans, more precisely of combatants already trained, and would make the difference in a direct conflict between two armies

SEE THROUGH THE WALLS

In the past, many clashes took place in desert areas, or in sparsely urbanized locations, which allowed soldiers to have an overview of the battlefield. Now, urban conflicts are multiplying, which means that a conflict in a city would not unfold in the same way.

Many countries are therefore working on technologies which make it possible to scan an area before moving. In 2015, a man from the Czech Republic successfully created a device allowing to see a human being which was on the other side of a wall, as long as it is moving or in breathing.

Also in 2018, researchers from the prestigious MIT developed a technology to locate people behind the walls with an accuracy of 83% .

This technology would therefore be very useful in urban areas, since spotting enemies would be much easier…

Seen and reviewed in many video games, homing weapons are, in science fiction, particularly decisive in a battle. Enemies, even overtrained and gifted for dodging, are trapped.

It is the United States Department of Defense that is working on the EXACTO project . “Intelligent” bullets are able to target an enemy, but also to modify their trajectory according to the movement of the person (or thing) targeted with a certain degree of precision.

They are also said to be working on a weapon that automatically targets enemies. The person holding the weapon would no longer even need to focus in order to target their enemies: the weapon would do all the work.

This name can make you smile. However, when we say that a team of researchers from the University of Washington has developed something in the same style, the smile quickly gives way to concern. In 2015, this team was able to create a laser that freezes a targeted liquid . It was the first time that a liquid had been transformed into ice, especially since in general, lasers melt objects rather than freezing them.

It is therefore quite possible to imagine a ray capable of freezing soldiers during a battle. If the weapon is not yet developed, it is ultimately only a matter of time before science manages to finalize it.

The incredible weapon many of us have discovered in Harry Potter may well become a reality. It would be particularly useful in everyday life, when you need to hide or just want to dodge someone. But, in a military framework, its absolute discretion would be a weapon of another level.

A Canadian company called Hyperstealth Biotechnology Corporation has successfully designed a material that can make you invisible. It will not reproduce the decor or blend into the environment, but will return the light around an object, a physical process that creates this invisibility. The American army has shown great interest in this product, and it is possible that other armies do the same, as the object would be practical on the battlefield or during infiltration missions.