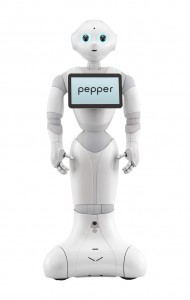 In this undated photo released by Softbank Corp., the Japanese mobile carrier’s Pepper humanoid-on-wheels is shown. Softbank is entering the robotics business with its Pepper, developed jointly with Aldebaran Robotics, owned by Softbank, that it says is designed for companionship and can decipher human emotions. The mobile carrier said Thursday, June 5, 2014 Pepper will go on sale in Japan in February for 198,000 yen ($1,900). The 1.21-meter (3 feet 12 inches) tall machine, which has no legs, but has gently gesticulating hands appeared on a stage in a Tokyo suburb, cooing and humming. (AP Photo/Softbank Corp.)