Researchers at Harvard University and MIT have developed a an origami inspired technique that enables robots to independently change their shape from flat to an articulated structure. Composed of copper layers, paper and shape memory polymer, this robot can be manufactured inexpensively with a laser cutter.

Many of you will remember the Transformers from your childhood cartoons, these robots were capable of changing their shapes. Now, Transformers have more real competitors. A team of researchers at the Wyss Institute at Harvard University and the Massachusetts Institute of Technology have unveiled a prototype robot that can change its shape from a flat structure to a quadruped. All this without any any external intervention.

The transformation takes four minutes and then the robot can move at a speed of about two inches per second. The scientific paper published in the journal Science explains that the design principle of this self assembly robot is based on the Japanese art of origami. The robot is designed from a composite of heat-sensitive surface which is carved with cuts and grooves to create hinges. When resistors in the robot are heated, the deformable composite material bends and cools to form the three-dimensional structure. Small motors inside allow the robot to move. 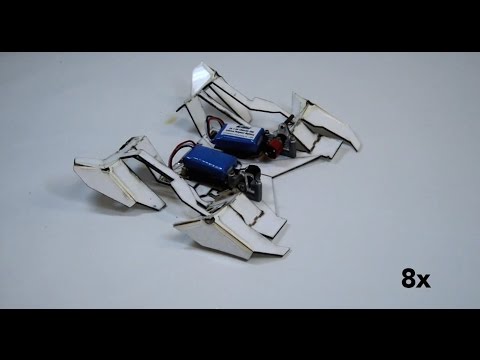 The composite material is made up of five layers. The central layer is a copper foil which has been etched using a laser to form a network of electrical connectors that connects the motors, resistors, and the microcontroller Batteries. This copper foil is sandwiched between two paper sheets themselves covered by two outer layers of a shape-memory polymers which when heated bend at predetermined angles. Currently, the prototype works independently with a timer that handles the sequence of operations and different forms. But the researchers say that it is possible use sensors to trigger the transformation, for example, at a certain temperature or pressure.

This new technology can have many interesting applications, especially in space. Imagine that flat robots or satellites could be packed in a container and sent to their destination where they could regain their desired form and complete the desired mission.